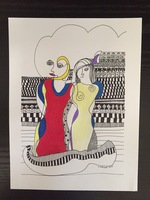 Sharon Kaliner was born in Brookline, Massachusetts in 1954.
As a young child, she studied art at the Boston Museum of Fine Arts.  She moved to Atlanta in 1973 where she studied art at Georgia State University.
Sharon exhibited her artwork in galleries in Atlanta and at the Piedmont Arts Festival while living in Atlanta. She took a sabbatical from drawing and painting to work in the business sector until 2001 when she moved back to Brookline.  Sharon then began painting and drawing again and moved to Philadelphia.

Now living 6 months in Philadelphia and 6 months in Jupiter, Florida, Sharon has kick started her art education and practice by studying with various artists in the Southeast.

Sharon's art has been exhibited in Atlanta, Philadelphia, Boston and Florida.
The CONTEMPORARY ART PROJECTS USA/ GALLERY at SPECTRUM, MIAMI  accepted three pen & Ink, colored pencil pieces for their booth at Art Basel in 2015.  In 2016, Sharon Will be exhibiting at her own booth at SPECTRUM, MIAMI.

Sharon is now working in mixed media including, acrylic, pen & ink, colored pencil, oil and soft pastels and collage.  She is also incorporating her own photography in to many of her painting.